skip to main | skip to sidebar
There were many important writers and journalists among the Jews of Bukovina. In the year 1932 Arnold Schwarz founded a new daily newspaper, "Der Tag" (The Day), which ceased publication after a few years in the year 1935. Among the prominent writers of the paper were Rose Ausländer and the graphologist Helios Hecht, with whom she lived until 1936, but also the poet Alfred Kittner. 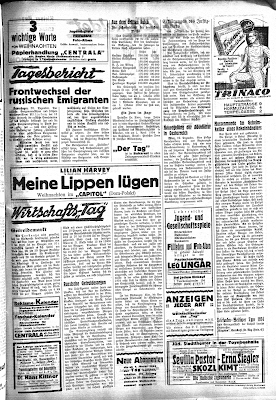 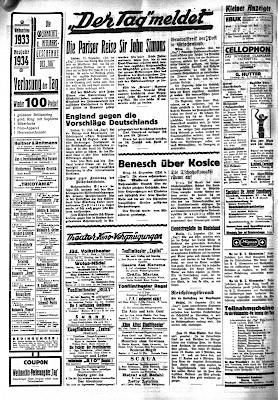 Yesterday we had the news about the great success recorded by the Czernowitz chess team against the team that came from Bukarest. 6 wins 5 draws and only one lost.
Among the players at least three personally known - Dr.Mayer Schapira the father of a good friend - accepted to play and teach me during the war and many years later came to kibitz when I played for Haifa against Tel Aviv - not chess but.. bridge. It was again David against Goliath, the smaller town against the metropolis. In February (1934)they will play a revenge play in Bukarest - I hope der Tag will report.